In my last post I sang praises for markdown as a way to write and collaborate on manuscripts and other scientific documents. As easy as it is to use, the one command line step is enough of a barrier for most academics. This brought back an old idea that I batted around with a few folks right after ESA. With all the tools and web technologies that currently exist, it would be possible to create a pre-print server that runs on markdown and version controlled with git. Here’s a rough vision for how all the pieces might fit together. 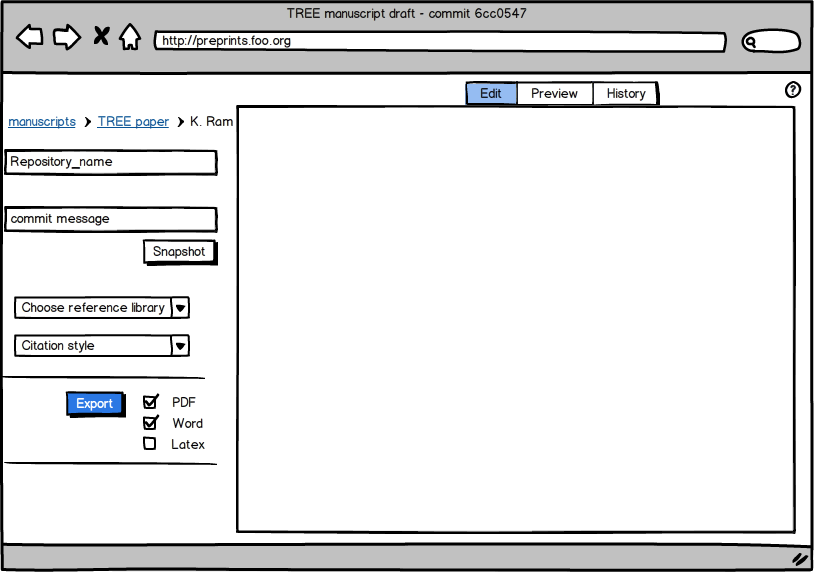 An author would begin by logging in with their GitHub (or similar) account. When a new manuscript is created, it automatically initializes a new git repository for the paper. Collaborators can be added using their GitHub accounts which automatically gives them write access. Documents are publicly readable by default (just like any GitHub repo) although one could change it to private if need be (which turns the repo private at the GitHub end).

Next, authors choose a library to use with this manuscript. This could be either Mendeley or Zotero (or any other alternative) since both services have APIs and mechanisms for collaboration. With Mendeley, for example, it is trivial to read an up-to-date list of documents from a shared library using existing API methods. Both services also have bookmarklets which makes it easy to update missing references without ever leaving the browser (and all these efforts would show up on the desktop library at the next sync). An author could also manually upload a bib file. As authors type out citations in the editor window, the engine behind the web app autocompletes the process by reading from the JSON file (if reading from an API call).

Adding in tables and figures

Although it would be ideal to embed R/Python/other code directly into the MS and have knitr add in the results and figures, it’ll leave that out from version 1 of this hypothetical server. Instead, authors can just use an uploader and add in tables (as csv files), and figures (as images).

As the author builds up the manuscript, snapshots (git commits) can be saved at anytime with a human-friendly commit message. Even if an author doesn’t commit often, the document (and associated files) remain autosaved. At any time the manuscript can be previewed and exported into any format (with pandoc or other document conversion tool powering this part of the engine).

Authors familiar with git can skip the web app entirely and simply clone a copy, work locally, and commit back to the repo. This will appear seamlessly on the web version and remain transparent to co-authors.

When authors are ready to submit, it could be as simple as forking the repo over (although a little too soon for something this efficient). For now, one could export the final PDF, or if the journal has a write API, then submit directly via an API call and quickly fill out author info with a form. Ideally there would also be a link to the full repository so reviewers can see everything.

There are several pieces that could be hacked together to make a first draft of this work.

Note: Although I mention a few services in the post (GitHub, Mendeley), the system is not dependent on these specific providers. Git repositories can be hosted anywhere (or even in multiple locations) and almost every reference manager can export citations as bibtex. GitHub just has the advantage of being a popular service (so a large user base), and already hosts the most number of academic papers, software, and code used in data analyses.